As you know, a legal maxim is an established principle or proposition of law, often established through the passage of time; not attributed to a specific individual, unlike a quote. Maxims have historically been viewed as a summary of legal principles, conclusions of reason, principles established through custom, and also principles used in a logical reasoning process, when thinking about a case. Thinking about this in rhetorical terms, maxims formed part of the first canon of rhetoric; namely thinking about what your arguments are in a specific case. Advocacy students, in the time of the Ancient Greeks, studied the Progymnasmata, a series of exercises to develop your rhetorical ability, and the study of maxims formed part of that. Being long established principles, often going back to Roman law they carry considerable weight, and they also provide a way of thinking about a particular issue. In legal practice, maxims have usually been backed up by references to cases.

The attitude of early English commentators towards the maxims of the law was one of adulation, viewing them as comparable to statutes. Christopher St Germain, in Doctor and Student  1518 describes them as follows:

And such maxims be not only held for law, but also other cases like unto them, and all things that necessarily follow upon the same are to be reduced to the like law; and therefore most commonly there be assigned some reasons or considerations why such maxims be reasonable, to the intent that other cases like may the more conveniently be applied to them. And they be of the same strength and effect in the law as statutes be.

Historically, maxims and the common law often worked together.

We can see a good example of this in relation to the law of murder. The most well known definition of murder is that found in Coke’s, Institutes of the Laws of England, written in 1518. 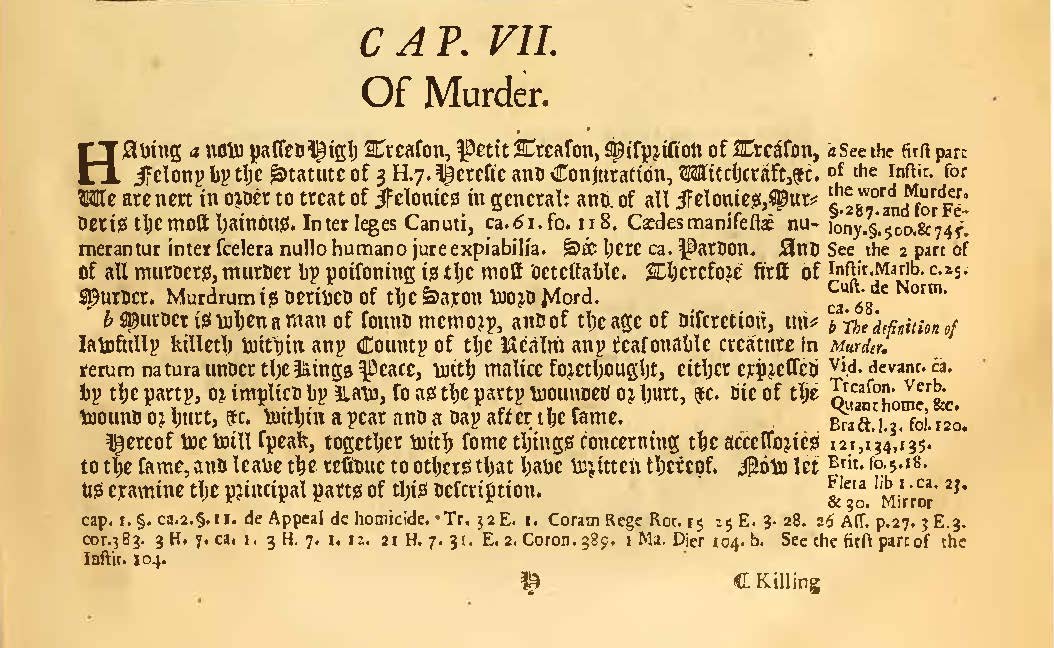 However, Coke then goes on to explain that principles, such as being of sound mind, rely on the legal maxim “Et actis non facit reum, nihi mens fit rea ”(the act is not wrongful unless the mind is wrongful) and these principles still hold true today.

Today maxims are still used, and some remain very well known, such as:

“He who comes to equity must come with clean hands”

There are six main collections of maxims and these are listed below along with links to the actual collections. All texts are courtesy of archive.org and are made available free of charge.

Francis Bacon, Collection of Some Principal Rules and Maxims of the Common Law (1630);

The most modern source of these maxims is Broom’s Legal Maxims. However, one of the reasons that maxims have fallen out of favour to a certain extent is most of them were written in Latin, with the English translation only included under the chapter dealing with that maxim. This meant that unless you know Latin, maxims could be quite difficult to look up. To make things easier, I have identified the names of the maxim in English and listed the page that deals with that maxim in Brooms Legal Maxims, which is the most modern text on maxims available.

Legal maxims relating to the Crown

The mode of administrating justice

The next series of maxims relate to specific areas of law. If you click on the area you are interested in the link will take you to those subject specific maxims.

The mode of acquiring property

The transfer of property

Maxims relating to marriage and descent

Maxims relating to the interpretation of deeds and legal instruments